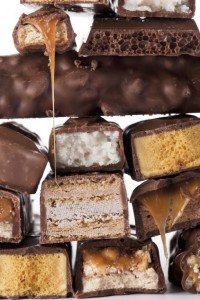 Hershey’s is America’s longest-lived and inarguably most successful candy company, but since the company’s explosion in the market at the turn of the century, many other candy makers have flooded stores with candies and treats.

Although Hershey’s chocolate bars are widely recognized — after all, who can resist that iconic brown and white packaging — many of our other signature sweets are perhaps not as recognizable. For a novel and unique Hershey’s experience, look out for these terrific tastes, and remember that if you can’t find them near you, you can head to Hershey’s Chocolate World in Las Vegas to access over 800 distinct Hershey’s candies in one convenient (and thrilling!) location.

These two related treats are remembered for their gooey, sweet coconut inside and decadent chocolate outside. Almond Joys are topped with a crunchy whole almond and milk chocolate, while Mounds are unique for their dark chocolate covering.

Refreshing and satisfying, York Peppermint Patties consist of a bright, sweet peppermint filling inside a thin, luscious dark chocolate shell. These simple treats are good on their own, but they can easily be adapted for use in various recipes.

Hershey’s may have become famous for its chocolate, but Milton Hershey initially became successful from his caramel. The PayDay bar is a tribute to those humble beginnings, as it contains a thick slab of caramel surrounded by crunchy, filling peanuts.

Widely known for their catchy jingle, Kit Kat bars combine the lightness of sweet wafer cookies with the creaminess of chocolate. Plus, as the jingle explains, Kit Kats are easily broken apart and shared with friends — though you may not want to do so.

One of the first candy bar creations to come out of Milton Hershey’s kitchens, Mr. Goodbar has been produced by Hershey’s since 1908. Perhaps its longevity is due to the bar’s pleasant simplicity: thick Hershey’s milk chocolate containing thick pieces of raw peanuts. The treat is crunchy and creamy, salty and sweet, which is the epitome of a satisfying candy bar.

The Krackel bar is made up of milk chocolate embedded with crispy puffed rice, as it was in its initial run during the early 20th century. In the 1920s and 1930s, the Krackel bar also contained almonds and peanuts to give the treat an added crunchiness, but wartime shortages during World War II necessitated the removal of these extra ingredients. Today, sweet lovers are happy to enjoy Krackel in its original, pristine form.

So unique its creators failed to come up with an appropriate name, the Whatchamacallit bar is a peanut butter-crunch filling, topped with caramel and covered in a thick layer of milk chocolate. In recent years, Hershey’s released a limited edition sister bar called the Thingamajig, which contained cocoa crisps and more milk chocolate inside the candy. Whatchamacallit fans eagerly await the Thingamajig’s eventual return.

While those who enjoy this relatively new candy might assume its name comes from Hershey’s desire to provide hard workers with a sweet and satisfying break, in reality, the Take 5 bar is named after the five ingredients it contains: milk chocolate, peanut butter, caramel, peanuts, and pretzels. In Canada, this bar was once named Max 5.

The first candy bar to unite the flavors of rich chocolate and buttery toffee, Heath first appeared on the market in 1914. Since then, Heath has become a phenomenon around the world, and the bar is often used in countless other sweet treats, like ice cream, cookies, and more.

The odd name and stark packaging of the Skor bar set it apart from the rest of Hershey’s candy line, but the high quality and unique taste of the chocolate bar mark Skor as a decidedly Hershey’s product. Skor bars consist of thin sheets of buttered toffee thickly coated with milk chocolate. Bafflingly named after the Swedish word for “shoe,” Skor bars were originally introduced to compete with Heath. However, now Hershey’s owns both and the bars’ subtle differences make them both beloved members of the Hershey’s family.

Because it is so beloved, chocolate is a contentious crop that can create tension in regions where it is widely grown. Hershey’s is committed to providing its fans the best chocolate experience possible while supporting chocolate growers around the world. This is why Hershey’s has introduced Dagoba chocolate bars, which are made of 100-percent organic fair trade chocolate.

The 5th avenue is a milk chocolate-coated crunchy, peanut-buttery bar. Though the 5th Avenue isn’t one of Hershey’s best-selling bars, it has made a handful of appearances popular shows and movies, including “Seinfeld” and “Stargate.”

Another Hershey’s mainstay that doesn’t rely on the company’s famous milk chocolate, the ZERO bar instead is made of caramel-drizzled peanut and almond nougat dipped in rich white fudge. The white chocolate shell is unique for most candy bars, which is what makes ZERO so memorable among candy fans.

Whatchamacallit image by www.schoko-riegel.com from Foter.com