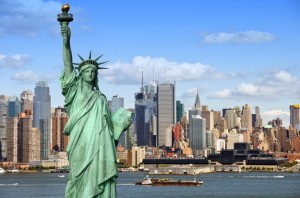 Las Vegas is in miniature what the United States is on a grand scale: a melting pot. Every year, millions of people journey to our mecca of worldly pleasures from all corners of the globe. Peoples as disparate as New Yorkers and Egyptians delight in the attractions of Las Vegas, and in response to its worldly reputation, it constructed some of the most recognizable monuments on Earth.

Next time you visit, take a tour of the grandest tributes to world cultures located all over Las Vegas. Even walking up and down the humble Strip, you’ll travel from Southeast Asia to Paris and more. With just a little imagination, you will be able to see the world without leaving the city.

New Yorkers visiting Las Vegas for the first time might feel more at home staying at the New York-New York Hotel and Casino, which does its best to replicate the best aspects of the Big Apple in the Southwest. Not only does the resort offer the culture of America’s most important city — fantastic New York pizza is available as well as ample shopping opportunities — but it presents visitors with familiar sights and sounds, too. Inside, guests can experience the joys of Coney Island with the Big Apple Arcade and Big Apple Roller Coaster. Outside, the New York skyline marks the location of the resort, including structures such as:

While you’re in the neighborhood, stop in Hershey’s Chocolate World to see more familiar New York monuments in a new medium: chocolate. On display are both the Statue of Liberty and the Empire State Building, which were created using more than 800 pounds of chocolate and 1,800 Hershey’s Chocolate Bars, respectively. The edible works of art are excellent for selfies, and when the photo-op is done, you can explore the world of Hershey’s and sample some fresh, new treats. 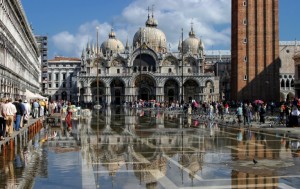 Even if the original sinks completely into the Mediterranean Sea, Las Vegas offers an excellent replica in its renowned resort, the Venetian. Walking along narrow streets and bridges and shopping in quaint boutiques located around the resort, you cannot help but feel transported to Old World Italy. However, if that isn’t enough, you can cross the Rialto Bridge into St. Mark Square, where human artists mimic the statuary that ornaments the real place. For a touch of romance, hire a trained gondolier to take you and your love on a moon-lit gondola ride down the Grand Canal, just like you would in Venice.

The resort is even dedicated to recreating Venice indoors. A bright blue, Mediterranean sky is painted on ceilings throughout the common spaces, and the sound of chirping birds makes strolling the halls absolutely delightful. Additionally, frescoes of other Venetian landmarks adorn the walls, perpetuating the Italian feel of the place.

Continuing a theme of romantic Western cities, Las Vegas offers a small-scale Paris where you can find everything from Renaissance architecture to fresh baguettes. Paris, Las Vegas is marked by the soaring Eiffel Tower — the top of which contains a restaurant with some of the most exhilarating views in the city. However, other familiar Parisian monuments represented here include the Arc de Triomphe and La Fontaigne des Mers, while the hotel itself replicates the façades of the Paris Opera House and the Louvre. If you can commit to eating croissants and crème brulee for the duration of your stay, you might forget which continent you are on.

In the 1920s, Egyptian fashion swept the United States as significant discoveries in age-old tombs increased knowledge and awareness of the great ancient empire; however, even as fascination waned toward the late 20th century, the exotic appeal of Egypt never quite waned in Las Vegas. Today, three tributes still stand to commemorate the influence of Egypt on the Western world: the pyramid, the obelisk, and the sphinx.

The Luxor Hotel and Casino, built to replicate the infamous Great Pyramid of Giza, is one of the most iconic hotels on the Strip due to its instantly recognizable design. Thirty stories tall and covered in dark, bronze glass, the Luxor looks like a modernized pyramid any Egyptian pharaoh would be proud of. Neighboring the hotel are a 140-foot-tall obelisk and a slightly miniature sphinx, which are some of the most familiar icons of Ancient Egypt. As a bonus, you can sleep in this pyramid without even the slightest fear of being cursed by a disturbed mummy.

Morocco is unlike any country on Earth: It is a mixture of Muslim, African, Spanish, and French cultures celebrated by one people within one border. Perhaps the similarity between the amalgamated cultures of Morocco and Las Vegas is why the art and architecture of Marrakesh is replicated so perfectly in one of Sin City’s oldest resorts: the Sahara. Containing plenty of pools and palm trees that offer respite from the biting heat of the desert, the Sahara bleeds Moroccan luxury.